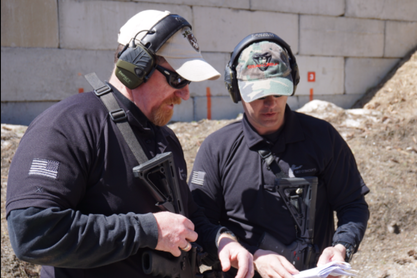 Peter is an entrepreneur and retired veteran of the Portland Maine Police Department.  He is co-founder of the department’s Special Reaction Team (SWAT) where he served 24 of his 26 years of service operating in many roles with the last being Entry Team Leader.  Peter continued his law enforcement career for another 5 years beyond his retirement contracted with the US Marshals Service security detail at the Portland Maine Federal Courthouse.

Peter’s first success in the firearms training industry was the founding and operation of Weaponcraft Inc. from its start in 1993 to its profitable sale in 2007.  Under Peter’s leadership Weaponcraft developed a respected reputation for exceptional training and customer service that attracted the attention of buyers interested in growing the company beyond its training roots.  Peter continued to support Weaponcraft after its sale until 2013 in various roles including Director of Training.

In 2014, convinced that an opportunity exists to create a best in class training company (yet needing operational control to do so) Peter founded SRT concepts.   Over the course of his career Peter has developed an expert background in firearm usage, operational planning, training design/doctrine, and student development.  Leveraging a broad network of experienced law enforcement and military contacts, Peter has dedicated himself to crafting Maine’s premier source for firearm training.

In 2015 Peter stepped away from SRT Concepts and accepted a management position at the Windham Indoor Shooting Range & Retail Store which is a sister company to Windham Weaponry. Peter was responsible for development of the firearms training program, operations of a 12 lane indoor shooting range, outfitting a 2500 sq/ft retail store and hiring staff. Additional duties included implementing operational and safety protocols, sales and marketing responsibilities. Under Peter's direction the Windham Indoor Shooting Range reached 2 million in gross sales in the first 15 months of operation.

"I've taken several training classes with Pete & Ted and I ALWAYS come out of class with something new. I'll continue to take more and even repeat several of the same ones again just to stay on point. If you want to learn some good tactics sign up, it's a safe and fun day. And remember, you take these classes to train and learn, no one expects you to be AWESOME when you walk out there. Training is the place to make the mistakes and learn from them."  B.C.